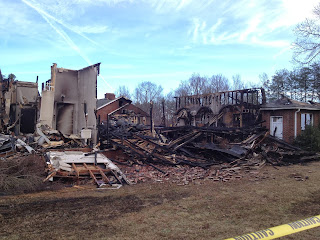 Riding into town on Wednesday, I heard the national noon radio news on CBS radio.  They announced a story from Stokesdale, NC, so my ears perked up.  When our town makes the national news, even on the radio, it's a big deal.

They briefly reported that the arsonist who destroyed the building of Gideon Grove United Methodist Church had been sentenced.  He pleaded guilty, and so the judge was to set the sentence.  As law allows, the pastor of the church, Wanda Lancaster, was allowed to address the judge concerning the sentence. Believing that the 18-year-old man would not benefit from a long sentence, she asked the judge to be lenient.

The judge was lenient and the young man received no prison time, but was fined and is required to do 100 hours of community service, including roof of the new building.  He also must address the members of Gideon Grove, reading a letter of apology.

Not everyone shares the desire to go lightly on the defendant.

The Rockingham County fire marshal has written a letter of protest to other fire and law enforcement officials in the area, calling the punishment a slap on the wrist.  Records suggest that restitution could have been set at about $45,000, just for the personnel and equipment needed to put out the blaze.

Others believe that a stiffer penalty would serve as a deterrent to arson in the future.

Wanda prayed and wrestled with her decision.  She spoke for herself, not for the whole church.  She spoke with courage, knowing that she would be criticized.  And she did what she believed was right.  She reflected the grace and forgiveness of Jesus.

Wanda, I appreciate your standing up and standing strong.  Some may say you are weak.  They said the same thing about Jesus as they nailed him to a cross.

May the spirit of forgiveness humble this young man and set him on a better path in the days ahead.  That day of sentencing for him was certainly a turning point for him.  Let us pray that he turns the right way.