I went to a classic car auction yesterday in Greensboro -- the first time I've ever been to one.  I went mostly for the chance to hang out with some friends from church, but it was much more interesting than I expected.  There were hundreds of cars waiting for a turn on the auction block, on display in a huge show room.  The real bidders paid an extra fee, while most people simply came to look.

What is it about automobiles that captivates us so?  Just seeing old cars brings back memories for me.  There was a 1964 Lincoln Continental, much like one my family owned.  I remember a few things about that car.  Whenever we took it through the automated car wash, we armed ourselves with towels, because the windows leaked terribly.  I also remember asking my mother about a dial on the dashboard:  it was the cruise control, she said, explaining how that feature worked.  The dial was slightly crooked, and Mom explained that it didn't work.  We had bought the car used, and apparently there were some issues with it.  I don't remember when we sold it, but I do remember that we ended up with a Volkswagen station wagon and a Toyota Corolla station wagon.  My dad liked station wagons. 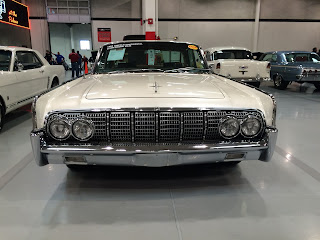 I'm not the only one with car-memories.  The auction room yesterday was full of old people telling stories and young people making memories.  I wonder if such fascination with automobiles is unique to Americans.

The cars from our youth make a deep impression on us.  My daughter's boyfriend was captivated by our 2003 Ford Windstar van, because it was like the one his family had many years earlier.  She, meanwhile, is mourning the failing health of the car she drives, the car that has been part of the family since before she was born.

It is not only cars, however, that make a big impression on us.  Visiting places of childhood brings back more than memories.  It brings back impressions and feelings.  We might remember a song or situation or a long-forgotten friend.  So much of our lives is shaped in childhood.

And that is why childhood and children are so important.  My children are grown now, but I know they have powerful memories from their early years.  Attitudes, perspectives and feelings about life take shape in those earliest years, when children spend hour after hour riding in back seats, looking out the windows, watching the world go by.