I watched a documentary on Netflix about Jimmie Hendrix a few months ago.  This man could shred a guitar.  His untimely death robbed us of more amazing music.

My family collectively rolled their eyes when I brought home the 49 cent U.S.P.S. commemorative Jimmie Hendrix stamps.  I would proudly pay bills with these psychedelic stamps, and pay tribute to a great musician.  Yes, he personified the sex, drugs, and rock and roll stereotype; but he had such talent. 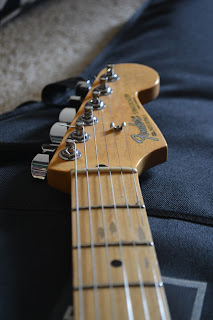 For him, life was all about music.  Everywhere he went, he had a guitar hanging around his neck.  Now I hack away at my Statocaster, playing basic chords and a few riffs I have picked up.  But I can't tell you many of the notes on the fretboard.  Jimmie, now, he knew the fretboard backwards and forwards.  He knew what each string on each fret could do.  He knew how to form chords from top to bottom.  It was second nature to him.  He did not have to think about playing.  It was like breathing to him.

Jimmie could play any song that he heard.  He often did covers, and did them so well.  I wish that he had done more original work, to show his creativity.  His most famous piece might be his "Star Spangled Banner" at Woodstock.  Again, not an original song, but unforgettable as it penetrated the New York meadows.

He was great because he loved what he did, and he carried it with him everywhere.  He had a heart for music.  For him, all of life related to music.

What do you have a heart for?  Do you carry it around with you everywhere?  Is there anything to which you would give that kind of devotion?  For too many people, mediocrity works just fine.

I want to be that devoted to Jesus.  I want his word to saturate my soul.  I want his love to overflow through me, so that I bring him into the room.  I want his eyes of compassion, so I can see the need around me.

Maybe I can be as good at showing the love of Jesus
as Jimmie Hendrix was at making music.  The only way that will ever happen is by God's grace.  Yes, grace.  That's the answer.