Discoveries: Reflections on 30 years of this

I've been doing this for 30 years now. I was ordained as a pastor on November 20, 1988 at Calvary Baptist Church in Winston-Salem, NC. As this milestone approaches, I have been trying to mine out the nuggets or distill the essence of whatever wisdom I have gained.

So tomorrow I'm beginning a sermon series based on my ministry experiences and personal growth. I have only served three churches, including Crossroads, so I'll be sharing about my discoveries with each place of ministry.

I began my pastor-life in November 1988 at Coolidge Memorial Baptist Church in Coolidge, Ga. Lisa and I had been married more than two years, so at least we could approach life as a team. We faced considerable challenges learning the local culture, and often found ourselves feeling rather lonely.

In March of 1991 we moved to NC, serving Comer's Chapel Baptist Church in Madison. There I had numerous distant cousins in the congregation. These were people whom I had never met, and had not heard of; but they knew and spoke of my late grandparents. It felt like a meaningful connection, and helped us feel more like we belonged. There we learned about real connections and their importance for life and ministry.

In September of 1999 we were sent by Comer's Chapel as missionaries to Stokesdale, where we founded Crossroads Community Church. We didn't know anyone in town, even though Stokesdale is only about 10 miles from Madison. It was just the four of us. Our daughters were 3 and 5 years old. We launched out in faith, trusting God to provide for and sustain us.

Today, I realize how important listening is--listening to others, to the Holy Spirit, to my wife, and to my own soul. While I expected by now to have all the answers to all the questions--doctrinal debates, ministry practices, social stances--I still have lots of questions. But maybe now I can at least frame the questions better, and meet all kinds of people right where they are. 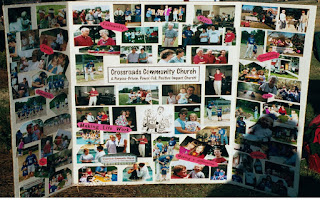