The King and I

Watching the TGRC's production of The King and I was a fun experience.  I shed tears watching my daughter play the part of Eliza, the lead role in the play within the play. 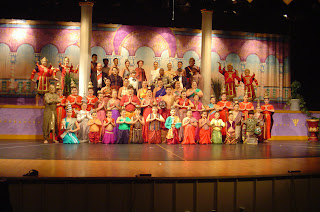 I also found myself shedding tears for the king.  He has invited an English school teacher to come to Siam and teach his 67 children.  Set in the early 1860s, the story shares the difficulties of Eastern culture meeting Western culture.
The king longs to bring his country into the modern era, and he sees the value of the "scientific" ways of the West.  But the culture shock is more than he expects.  Anna, the teacher, respectfully presses him without hesitation about traditions and culture she finds offensive.
She particularly hammers him about his promise to provide a house for her and her young son.  The king claims not to remember such a promise, and as king, he says that only his memory matters.
The East/West tensions mount over issues such as slavery, women's roles, polygamy, and justice.  His view of a strong king includes ruling his people with fear.  The breaking moment for him comes when he is ready to whip a runaway slave girl.  The king wants to show that he is a strong king by whipping this teenage girl, held down by two grown men.  The irony is more than he can bear, and he becomes a broken man.

Prevailing wisdom teaches that all cultures are equally valid and good.  But is that true?  Is a culture with slavery just as good as one that emphasizes freedom?  Is ruling with fear as good as ruling with law?  When promises mean nothing, is society better?

And finally, why was the Eastern king seeking a teacher from the West, instead of vice versa?

Western culture has its flaws, to be certain, and I think we can learn a lot from Eastern cultures.  But every culture benefits when it recognizes truth and adjusts to truth.  The real rub is not the clash of cultures, but the battle between truth and man-made traditions.
Posted by David Bailey at 2:18 PM

Last Sunday we had the privilege of celebrating new life in Christ through baptism.  It is always a joy to know that Jesus has transformed a life.  His work of transformation lasts a lifetime, but the moment a believer acknowledges Jesus publicly through immersion is  a sacred moment.  It is a time to reflect on God's goodness in loving someone into relationship with himself.

Now, the weather also made last Sunday's baptism memorable.  As we began gathering at the lake, just before 2:00, the clouds also gathered.  Soon there were rumbles of thunder.  When we began our baptims, there was a look of urgency on the faces of the crowd.  I couldn't see it, but streaks of lightning were clearly visible behind me.  I did hear the thunder.  It kept getting louder.

Fortunately Jesus held off on the rain, and there were no close calls with lightning strikes.  I'm glad that none of us got an early trip to heaven.

We had planned to have a fun time swimming after the baptisms, but by 2:30 the rain was coming in torrents, and everyone was safely away from the beach.

Next time we baptize, I hope we all get to swim.  But better than that is hearing the stories of Jesus giving life, joy and hope.  That never gets old.  I love displays of God's power.
Posted by David Bailey at 8:46 PM

The Radical Life Process, as I call it, describes the way that God develops us, from the inside out.  I see the process working in three concentric spheres.  At the core, we Center on God.  In the middle layer, we Connect in Relationship.  On the outer layer, we Change the World.  I see this process throughout the scripture, as the way God matures us and makes us like Jesus.  I plan to write a book someday.  (Don't laugh.)

As I keep developing this model, God continues to give me new insights.

At the Center layer, our focus is on Worship.  We get to know God, and we get to know ourselves in relationship to him.  That's what worship is.

At the Change the World layer, our focus is on Work.  We engage life as we pursue our life's work.  That work may be a job or career, but that work may be something else we feel passionate about.  We pursue the thing that God has created us to do.  Then we live radically, as all the layers of our lives line up.  We live in the power of the Spirit of God to accomplish that work he has for us.  We give him glory, he gives us complete joy.

Last fall sometime I got the book Getting Things Done, by David Allen.  I pledged to cyber-space that I would let you know how it's working for me.  I haven't forgotten about it, and I've been working on it.  This week I got an old-fashioned paper calendar/planner.

So far the GTD system has helped me a lot.  I'm not quite working the system properly, though.  I'm trying to figure out the difference between my projects lists, my projects folders, and my Next Actions list.  I know there is a solution, and I'm re-reading those sections of the book.

Sometimes I'm not the best at grasping the obvious.  In any event, my organization is worlds better than it used to be.  There's some good tweaking to be done.  I'll put that on my Next Actions list.
Posted by David Bailey at 11:13 AM

The way into fellowship

For Christian fellowships, being part of the community involves believing, belonging and behaving.  These three elements don't all come at the same time.  Some fellowships require that you first believe as they do about cultural, moral and spiritual matters.  Secondly, you must behave as they do, following the rules, both written and unwritten.  Finally, if you can pass these tests, you are accepted and you belong.

The problem with this order of business is that the cost of belonging is so great that few people can rise to the challenge.  Such fellowships of believers remain small, and can become clique-ish.

A better way to grow a community is to change the order of the steps.  People can be allowed first to belong, warts and all.  In a loving environment, the Holy Spirit can work in their hearts and lead them to believe.  Once they belong and believe, they have the will to behave.

The Holy Spirit, living in the new believer, helps him or her want to change behavior, to become more like Christ.  The others in the fellowship can provide the love, support and accountability that makes the transformation possible.

Maybe loving our neighbors where they are is a good place to start.  We bring people into fellowship through belonging, believing and behaving.
Posted by David Bailey at 1:34 PM

I am amazed at the ancients.  I was inspired to pick up Augustine's Confessions today, and I marvel at the detail of his account and the depth of his insights.  Before he came to Christ, he struggled with discovering truth.  He tested the ideas of the prevalent gnostic religion of the day, and his search for truth led him to Jesus.

After these years of searching and discovery, Augustine wrote multiple books, commentaries and essays.  He drank deeply of the classical works of Greek philosophy and passed the truths of these non-Christian writers along to Christian thinkers.

What amazes me his how prolific men like Augustine were.  They read and studied vast works of the thinkers before them.  And they did it without the incandescent light bulb, and without reading glasses.  I imagine that large-print scrolls were hard to come by, too.

Today we have word processors.  (Wish I had a computer back in my college days.)  We have spell checkers in our computers and thesauruses on line.  We have lights and glasses to help us see.  The information available to us in an instant is staggering.

And, yes, there are a lot of people who write a lot of stuff today. But rarely do we find someone as thoughtful and profound as Augustine.  It's not hard to see how someone could write volume after volume today--it's easy.  So how did they do it hundreds of years ago?  I'm amazed.

Now for my confession.  I began reading Confessions probably 15 years ago.  I'm maybe a third of the way through the book.  But today, for the first time, I think I get it.
Posted by David Bailey at 1:09 PM