A Vietnam veteran spoke to me on Sunday after I had preached about loving one's enemy. He had seen real enemies who wanted to take his life. This "love your enemy" talk seemed to require the impossible. How can one love a person who would kill them?

As I spoke on Sunday about that passage in Matthew 5, I failed to make an important clarification.

Jesus is calling us to express love through action toward our enemies, but not calling us to generate warm feelings of affection toward them. Because of love, we should cooperate with the person making unreasonable requests, Jesus says. We refuse to retaliate when harmed. We freely lend to those who want to borrow.

Rather than treating people with hatred, we treat them with love. Clearly Jesus is not expecting us to love enemies as we love our own families.  While we may not have affecti 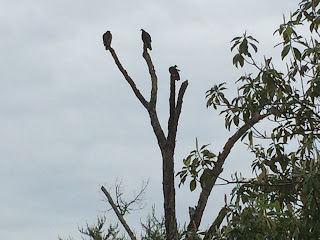 on for our enemies, we can behave toward them in a loving way. This is love through action without a spirit of cursing toward them.

In Luke 6:28, Jesus puts it like this: "Bless those who curse you." Loving enemies is never easy. Jesus calls us to live and love through his power. Only through his power can we experience the kind of life he wants for us.

In Danger for the Gospel

Two American missionaries were killed in Jamaica last weekend. Here is the link to a CNN report of the incident. This hits home to us at Crossroads, because in 2009 we sent a team of men to do some construction work in Spanish Town, Jamaica, not far from Kingston. I first learned of the murders through email with our mission contacts from Jamaica. Our contacts, who served as missionaries for years in Jamaica, now live back in the U.S., but they knew the men who died.

The victims had no known enemies, and reportedly felt safe in Jamaica. Their work included building homes for needy people. They were sharing the love of Jesus with abandon and enthusiasm.

Another friend told me about folks he had met in India years ago who recently lost their lives for the gospel.  In March a pastor, his wife and two children were murdered and burned. Many are concerned that Christians in India will suffer persecution again, as they did in the early 2000s. Tens of thousands of believers died as entire villages were purged. I don't remember any media reports about it.

Today, Christians in America seem to be magnets for blame. They won't toe the party line. They think independently. They answer to a higher authority.

I wonder if we are ready for real persecution. Living the gospel is dangerous.
Posted by David Bailey at 10:39 PM