Leading a People, Leading a Movement

We turn to the scriptures to learn about leadership, and two of the most successful leaders were Moses and Paul.  In the Old Testament, Moses led the people of Israel out of Egypt into the Promised Land.  After the resurrection of Jesus, Paul led a small band of missionaries from city to city around the Eastern Mediterranean region.

Both men changed the world because of their life's work, but their roles of leadership were much different.  Moses led a group of a million plus through the desert for 40 years, as they toggled between rebellion and repentance repeatedly.  Moses dealt with the gripes, complaints and mutinies that all leaders face.  He followed his father-in-law's suggestion of delegating responsibilities so that he could focus on listening to God and leading.

Many church leaders today face the same kinds of pressures and challenges, especially in large churches.  There is trouble from within and without, just as in the days of the Exodus.

Paul, on the other hand, was a different kind of leader.  He did not lead a people but a movement.  Although he started as part of the Jewish religious establishment, after Christ appeared to him, he had a new mission.  His mission was not to lead a large assembly, but to make disciples.  On his missionary journeys he went by land and sea to share Christ with Jews and Gentiles from Palestine to Rome.

Paul never led masses of people across the desert or across the street.  He challenged the lost to come to Christ and believers to take Jesus seriously.  He knew that, unlike Moses, he could rely on the Spirit of God to lead the new disciples.  The Holy Spirit would inspire these believers to change the world.  And they did.

Paul was not just leading a group of people, but a movement of God.  He cooperated with the Spirit of God, going where Jesus led him to go, sharing the truth of the Kingdom of God.  As he traveled about, he revisited cities where he had seen churches start.  He encouraged, he challenged, he warned, he rebuked, he rejoiced.  He also faced challenges to his leadership, threats from within and without.

Moses' task was preservation, transportation and instruction of a people.  A few people came to believe in Yahweh because of the influence of the Jews.  But the emphasis was on getting the Jews out of Egypt and into Canaan.  Moses led them to the cusp of the new land and Joshua led them to conquer it.  Moses was a great leader.

Paul's ministry was to release the power of the Holy Spirit in lives and communities around the Mediterranean world.  God would lead the work.  It would be decentralized and viral.  It would spread just like Jesus described in the parable of the yeast.  Paul was a great leader.

As I learn lessons from these great men, I resonate with the model of leading a movement.  I want to be part of a movement of God.

We have an interesting tradition.  Years ago, my older daughter suggested that we have an annual "Bailey Day."  The suggestion came in January, and so I looked for a good way to take time off work and take time with family.  Martin Luther King Day seemed like a great time to devote to family.  I think that MLK himself would approve. 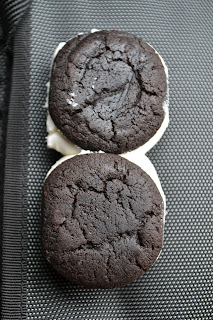 Every year we take time to do something special:  go to a museum, take in a movie, make something together.  This year we drove around NW Greensboro, looking for objects to photograph.  Our mission was to find objects that looked like the letters of our last name.  We can print and frame them, then hang them in the house.  It helps that our name is only six letters long, by the way.
Well, we had a hard time finding our first letter.  We stopped at Harris Teeter for a snack.  We brought it to the car, and when Lisa opened the package, I said, "It's a B!"  Yes, these Oreo Cakesters came out stuck together, the perfect object for our letter collection.  (They are actually pretty good to eat, too.)
We went on to get all six letters, although our "L" is pretty pitiful.  You would think that would be the easiest letter of all...
We were looking for something, but didn't expect to find it in a cookie package.  If you are looking for something, maybe you'll find it where you least expect it.
Posted by David Bailey at 5:06 PM

I friend told me yesterday that he challenged his middle school Sunday school class as the new year begins:

You won't be the same person at the end of the year.  You will change, for the better or for the worse.  What kind of changes would you like to see?  What steps can you take to make those changes?

Wow.  That is powerful and simple.  We can either let life happen to us, or we can take the initiative to create those changes that we want.

Every day we are becoming the person we will finally be.  Every day we make choices that make us closer to -- or farther from -- the person we want to be.  God can help us make the right choices.
Posted by David Bailey at 7:12 PM

There is bad blood in Sudan.  For years, stories of abuse and enslavement have come from southern Sudan.  On Sunday a referendum began in southern Sudan, in which the citizens could choose become independent from the rest of the country.  The votes still aren't counted.  The people in the south of Sudan have been abused by the national leaders.  The people in north and south are different from each other.  In the north, they are lighter-skinned and Muslim.  In the south, they are mostly dark-skinned and animist or Christian.  Before the current abusive situation, there was genocide in Sudan, 1983-2005.

George Clooney is trying to change the world in Sudan.  He and other celebrities are working to get a commercial surveillance satellite orbiting the earth over south Sudan.  If the world can watch better, then the militant groups may behave better.  Not a bad idea.  Clooney believes it could prevent another genocide.

Closer to home, Charlie Engle was sentenced yesterday to 21 months in prison, convicted of real estate fraud.  Engle is an ultra-marathoner.  He ran across the entire Sahara Desert, raising awareness of the need for clean water in that region.  He teamed up with H20 Africa to raise money for wells.

Prosecutors say that Engle obtained mortgages and second mortgages under false pretences and used the money to live on while undertaking his Sahara venture.  I want to give him the benefit of the doubt.  He's a likable guy.  But before he was sentenced, he said that he had been "foolish enough to think that I could change the world."

Is it foolish to think that?  Some of us really want to change the world.  Most of us don't have the power of celebrity or the endurance to run ultra-marathons.  But even ordinary folks can change the world.

God uses ordinary people -- and sometimes famous people -- to change this world.  And when we let his Spirit empower the work, that's when unbelievable things happen.
Posted by David Bailey at 4:48 PM

I'm reading a fascinating book called "The Discoverers," by Daniel J. Boorstin.  He recounts the history of the important discoveries through the ages, but he begins with some very unexpected breakthroughs.  The first discovery he describes is the discovery of time.

That almost seems like the discovery of air -- how could you NOT know it was there.  But the notion of marking increments of time was a significant idea.  Days are not of uniform length through the year.  The phases of the moon helped some, but were out of sync with the solar year.  The summer and winter solstices -- the longest and shortest days -- proved to be the best points of reference for the solar year.  For daily measurements, high noon was an obvious marker of mid-day.

To imagine a world in which punctuality had no meaning is difficult.  Yes, in many cultures today, 7:00 really means around 8:30, but for millennia, no one could really distinguish 7:00 from 8:30.

The world was much more a riddle back then.  People tried to explain why the ball of fire revolved around the earth every day.  They explained the phases of the moon by saying that the souls of each month's dead ascended to the heavens and gathered to create the light.  When the light was full, it emptied back out, ready for the next cycle.

There are so many ideas about how the world works.  Some are based on superstition, some on faith, some on science, and many are based on a combination of the above.  What can we really believe?

If the One who made it all would shed some light on this world, it would be worth listening to him.  He has shed light through his Word.  The Creator has spoken.  He has revealed himself, through his written Word, and through his Son, the Word who became a person.

In the midst all the confusing and contradictory ideas of mankind, it helps to have a point of reference for truth.  God has provided that reference by revealing himself.  That gives me a new reverence for the Bible.
Posted by David Bailey at 11:18 AM

Somehow the new year always gets me excited.  I feel like I get a fresh start.  I think it's because the holiday time gets me out of the routine, and I get to settle into a new routine.  The Christmas decorations come down, and everything is swept clean.  Even my desk.

With the new year I can begin new habits, like keeping that desk clean.  I took time last month to get my desk actually organized.  All I really needed was a power strip long enough, so that I could put my desk lamp where it really needs to go.  That inspired me to clean out old files and arrange everything so that I could actually reach it.

I'm working on the Getting Things Done system, and I am gradually making it work.  I've been at this GTD project for over a year, and it has helped me to be organized.  The more ideas I implement, the better it works.

Anyway, the fresh start and the organized work environment gives me hope that I can accomplish more, plan more, make more of a difference in the world.  And, I intend to have fun in the process!
Posted by David Bailey at 5:37 PM