Revenge of the Fire Ants

Joseph made the Israelites promise to take his bones for burial in the Promised Land. It took 430 years, but his descendants finally made it happen.

I spent years destroying fire ant mounds in Fort Worth, Texas, and apparently they passed word along for generations to come get me. It took about 30 years. They caught up with me last week.

For those blessed with ignorance of fire ants, please enjoy your bliss. But they are aggressive, prolific, and angry. They are especially angry when you disturb their mounds, even accidentally. The first time I encountered a fire ant, I was delivering the Fort Worth Star Telegram newspaper along my paper route. I was walking through the grass of an apartment complex when a bagged newspaper slipped out of my hand. I picked it up from the turf, and moments later, I felt a searing pain on the back of my hand.

Ouch! It felt like fire! In just a moment I realized that I had been bitten by a fire ant. I learned to look for ants, and avoid them like I never needed to in NC. 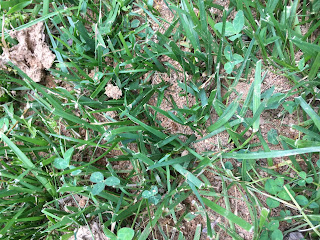 A few months later I got a new job working for the landscaping crew at my graduate school. This put me in close, regular contact with those evil creatures. My job was mowing grass...not putting out insecticide. So I had to learn real well how to spot the signs of fire ants. When I was promoted from push mowers to riding mowers, I learned to take great delight in scalping those ant hives. I would go out of my way to scatter their six-legged bodies far and wide. I don't think I ever suffered a bite while rolling along in my 60 inch swath.

Now understand, fire ants live in the hot, dry sandy parts of North America, like Texas and along the Southeast coast. They have been migrating ever so persistently toward colder, less sandy realms.

Then last week. Last week came after last winter. Remember that cold winter that would never let go? Remember the first 7 days of 2018? It never got above freezing. I walked repeatedly across my farm pond. I felled trees on that frozen reservoir.

If ever cold weather would halt the march of the fire ant, this winter had to set them back. But they found me. Innocently I pushed my mower through the lush, front yard turf. I noticed some ant hills, of course as I casually paced along. Then I had this pain up near my knee. Ooh, what was that? Then another, another, another. Nearly a dozen of those sensations made me wonder if I was having some sort of neurological episode. I saw no creatures, and at first saw no evidence of bites.

It never occurred to me that I was fire ant lunch. We don't have fire ants in Rockingham Co. I had heard rumors of them in neighboring counties, but not this far north. When the welts showed up, I came to the sobering realization. They had found me. After all thee years they found their revenge.

From now on, I will have to watch my own yard for those hateful insects. I'm getting some Spectricide. Game on.
Posted by David Bailey at 9:01 PM