The Lure of Certainty

Reading about the temptation of Jesus in Matthew (4:1-11) this morning, I noticed something. There are three temptations. First, Satan tempts Jesus to turn stones to bread. This temptation makes sense. Jesus had been fasting for 40 days. Obviously he was hungry. There's no reason for the Son of God to be hungry, now, is there? We easily understand the temptation of food, even when we aren't hungry.

The third temptation in Matthew is also easy to understand. Who would not want all the kingdoms of the world and their splendor? Satan offered this to Jesus, if only Jesus would worship the devil. That's a big payoff for a mere gesture of worship.

But the second temptation is curious. Satan told Jesus to throw himself off the highest point of the temple mount in Jerusalem. Why would he be tempted to do this? Most of us have little difficulty avoiding throwing ourselves off tall buildings. What could Jesus possibly gain from this stunt? Worst case, Jesus would be dead, from apparent suicide. But Satan assures Jesus that God will command his angels to save Jesus. So the best case is that Jesus is swept up from the fall by angels and safely placed on solid ground. This would certainly boost Jesus' fame, and potentially spread his message faster. But maybe the real temptation was something else.

Maybe Satan was tempting Jesus to gain certainty. If he jumped off and splatted on the ground, it would all be over. But if he were saved miraculously, then Jesus would know for certain that he really was the Son of God. There's proof positive. Notice that Satan's temptation begins with "If you are the Son of God..." The payoff, the temptation here, may not be fame but certainty.

Jesus was willing to find his certainty in his trust of the Father. He did not need a stunt to prove anything. His certainty came from relationship.

I don't know what stunt we could devise to be sure about the future. But I do know that God calls us to trust him. Living by faith is trusting God, especially in times of uncertainty.

Jesus told his followers that he would be with us until the end of the age. Let's live like we believe it.

An Epiphany to Remember

January 6 is the feast of Epiphany on the Christian calendar. It marks the visit of the Magi to baby Jesus in Bethlehem. The word means "manifestation," and the Magi's visit marks the Lord's first manifestation to the Gentiles.

Epiphany also means "a sudden...perception of the essential nature or meaning of something." I wonder if Americans suddenly realize how precious is our republic. We take for granted that our votes matter, and that our democratically elected representatives will defend the U.S. Constitution and stand for the rule of law.

When a new administration moves into the White House, news commentators always note that in America there is a peaceful transition of power, regardless of the party going in or out of power. Since 1789 we have had peaceful transitions of power. Even at the brink of the Civil War, no one stormed the Capitol.

We must not take our republic for granted, as Benjamin Franklin famously implied. We need to uphold the Constitution, even when we disagree with the outcomes of elections. There will always another election. Or at least there always has been.

Christians in America also need another epiphany: the governments of humans will always be flawed and can never bring in the kingdom of God. As Jesus said, his kingdom is not of this world (John 18:36). He reigns in the hearts of his followers, transforming our lives from the inside out. When his love rules in our hearts, this world really becomes a better place. It takes time, centuries, apparently. And one day he will return to rule on earth.

Until then, we must let his love rule our lives and work to make these earthly governments as just and peaceful as possible. 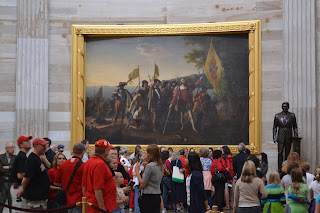