The Boss, Freedom, Politics, and Bathrooms 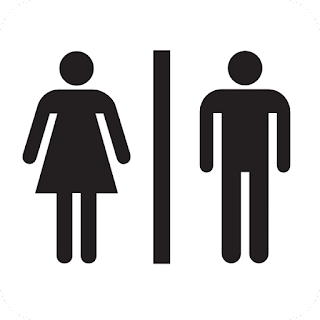 The Boss has made it official.  We now have a national debate about who can use the Boys' and Girls' rooms.  Seriously.  If you take a step back and think about it, this is beyond silly.  Who is going to check people as they enter restrooms?  Are we going to have government employed bathroom monitors?  You only thought the TSA frisking was invasive.

The City of Charlotte merely expanded its anti-discrimination policies regarding public restroom use to include sexual orientation and gender identity.  They want to be as open as possible to all kinds of people.  I could not find the exact wording of the ordinance on line, but articles indicate that its most controversial provisions allow people to use the public restrooms that best suit their preferences.  Thus, cross-dressing and transgender people could use restrooms normally designated for the opposite sex.  Oddly, the term "opposite sex" itself seems unclear in this context.  For the bisexual community, apparently they could use which ever restroom suits them on any particular day.

Making everyone feel welcome doesn't happen without a lot of effort.

My opinion is that Charlotte should handle its own bathroom rules.  (I also believe that their new ordinance is irresponsible, confusing, and potentially dangerous.  The city could set itself up for lawsuits alleging that their ordinance allowed for sexual assault.  Charlotte joins the chorus of celebrating any and every form of sexual expression.  If it is sexual expression, it is good.  If you don't like it, then you are backward and bigoted.)

The story gets even more twisted at the state level.  I did find the verbiage of House Bill 2.  It is five pages of minding other people's business.  It begins with definitions of various kinds of restrooms and biological sex.  Then it spells out exactly who can use which restrooms.  And it has some other provisions limiting discrimination lawsuits.

When you boil it down, the whole issue revolves around Freedom.  Freedom is a tricky thing.

Consider:
It seems that someone's freedoms must be curtailed.  Which freedom is the most important?
As these freedoms compete, there seems to be a wave of support for the first freedom.  Entertainers, sports leagues, and corporations have all condemned the law, and pulled back from connections with NC.  The governments of Charlotte and the State of North Carolina have effectively driven a wedge deep into our society.  Public pressure makes it difficult to stay out of the debate.  One is either a bigot or pervert.  Choose your side.

Notice that everyone wants to tell other people what to do.

Our culture sounds like 7-year-olds pointing fingers and screaming, "Make her do what I want!"  It's all about me getting what I want, and I want other people to do what suits me.