Americans have always been suspicious of those who want control.  Pilgrims came across the Atlantic to get away from those who would control their religious beliefs.  The colonists rejected the control of the British government, which sometimes set policy from across the ocean. 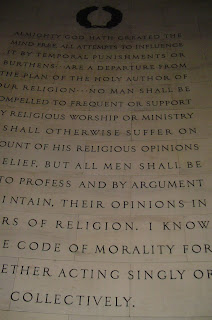 The old West was populated by people who wanted freedom and elbow room.  They rejected the control of those in the East.

God seeks to control us, but not by force, and not by religion.  He wants to change who we are on the inside, so that we freely choose to do what is right.  That is life and freedom.  And it brings us joy!