Government You Can Trust

The spectacle of Washington politics has been crazier than usual for a couple of weeks now.  The government is "shut down," causing headaches for some people in the real estate industry, and keeping some federal employees at home.  The debt ceiling is looming on the horizon, as politicians debate how much more we can borrow.

The debt will never be repaid, so all the efforts are aimed at continuing the illusion that this government is responsible.  See my blog post about the size of the national debt.  The U.S. government has been irresponsible for generations, building a financial house of cards which will eventually come crashing down.  Every politician works to put off the day of reckoning, so that the crash will not happen on his or her watch. 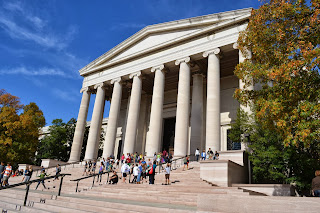 Our leaders have not followed the U.S. Constitution, and that has caused a lot of problems.  The Founders understood that power corrupts, and so they crafted a system by which government is split into three branches.  Those branches would watch over one another, to make sure that power would not be abused.  The system only works if the leaders obey the rules of the system.  Gradually they have ignored the rules and led our nation away from limited government.  The voters have allowed it to happen.

In Jesus' day, ordinary people knew that they could not trust the government.  The Romans were despised, as they militarily occupied the land of Israel.  The Jewish political leaders were also the religious leaders.  They had their own agenda of retaining whatever power the Romans would allow.

As far as I know, there has never been a government free of corruption.  The U.S. government is following the historic pattern.

But Jesus will one day rule on earth.  "And the government shall be upon his shoulders.  And his name shall be called, Wonderful, Counselor, the Mighty God, the Everlasting Father, the Prince of Peace" (Isaiah 9:6).  That is government we can trust.

In the meantime we pray, "Thy Kingdom come, thy will be done."