Jesus said that the world would hate his disciples.

The world hated Jesus so much that they crucified him. He challenged people's assumptions, exposed their abuse of power, and criticized their desire for wealth. The downtrodden and outcast really liked him; people in power despised him. Those for whom the system was not working flocked to his teaching. Those who benefited from the system resented his reckless disregard for a time-tested system of honor and reward.

This teaching about being hated really bothers me. I don't want to be hated. I go out of my way to avoid offending people. If the world recognizes Christians by their love for each other, who could hate that? If we forgive and give to the poor and love our neighbors, how could that offend?

That's my disconnect. Jesus says that we will be hated, and he gives us the ministry of reconciliation and love. If we follow him with abandon, why would anyone hate us? 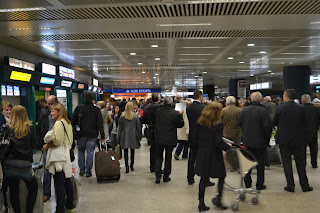 Obviously Jesus followed his own teaching. He loved the unlovely. He gave himself willingly. He lived with humility.

But Jesus also pointed out the flaws in systems and individuals. He called out the abuse of power. He pointed out the hypocrisy of religious elites. He refused to buy into the system of his day. He exposed selfish motives. He debated theology, and challenged dogma. His pushback against the system made people hate him.

And in the modern, Western world, the followers of Jesus don't seem to be hated too much. We try to live out the love component, but don't want to rock the boat. We don't push back against the system. To a large degree, churches and Christians work quite well, thank you, within this system.

We market our causes, leverage social media, and show the world that there is no reason to hate Christians. Yes, I know that elsewhere in the world, believers are tortured and executed. They are experiencing the hate of the world. I also know that in America Christians are overlooked for promotions and marginalized in the media. Christians are often made the scapegoats for all the ills in our society.

But I don't feel hated. Being hated is not my goal. That would be foolish. But Jesus did say that his disciples would be hated by the world. Is that no longer true? Or am I failing to challenge the system like Jesus did?

I think I know the answer.