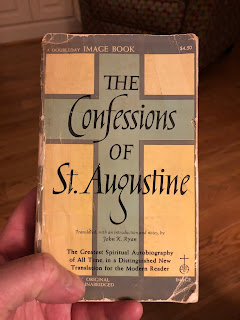 I just finished reading Augustine's Confessions. It took me 35 years to finish. No kidding. I bought the book at a used book store in 1985 at the recommendation of a mentor, Mark Corts. I may have started reading the book right away, but I'm sure it was over my head. Much of it is still over my head. 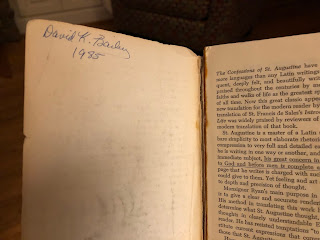 So I have some confessions to make about this book. A classic, it has endured for 1600 years, being called "The Greatest Spiritual Autobiography of All Time." Clearly a worthwhile read.

I confess, first of all, that it took me approximately forever to finish it.
There were many parts of it that I really liked and understood. He expresses his heart with all his doubts and questions. Some parts were repetitive and tedious.

I confess that I wonder how anybody had the time, centuries ago, to write so voluminously.

I confess that I must be lazy. I like to write, but can barely hack out a blog post occasionally--with electronic word processing. Augustine, sure he had fewer distractions, but he had primitive writing tools. Maybe he had a scribe, but even dictating his works would be a major feat.

I confess that finishing Confessions became more about checking it off my list than really gaining wisdom from it. I did gain some wisdom, but mainly I just wanted to get it off my partially-read list.

I confess that I remember very little of it, especially the parts that I read decades ago. But it still counts. I did read it, whether I remember it or not.

I confess great admiration for Augustine. He boldly expressed his struggles, doubts, ideas, and insights. He left a great legacy of Christian thought, and he has shaped Western thinking more than we realize.

I confess that I wish I were more dedicated to writing. Nothing endures like writing. Through writing we can communicate directly into the ages. I confess that I hope that I have something worth communicating to someone else, today or tomorrow.

But I doubt that I'll ever have a species of grass named after me.