The Bites and Stings in Relationship

Sitting on my deck this morning I saw one of those big Japanese hornets flying around.  Of course I don’t really know what kind of bug this was.  Normally those hornets are so loud you can hear them before you see them.  This one was the stealth variety, I suppose.  He came over toward my chair, and I lost sight of him.  I wondered if he would sneak up behind me and sting my leg.  The mosquitoes love to sneak around and bite me where I can’t see them.


Then it occurred to me that the hornet didn’t really want to sting me.  He was looking for food or a friend, or a water fountain.  The hornet would only bother me if I threatened him.  Stinging bugs sting because they feel threatened.


Biting bugs, however, will go after me.  They need food and consider me a provider.  It doesn’t matter if I provoke them.  Biting bugs bite because they want food.


This was a big aha for me.  The stinging bugs are just protecting themselves, and the biting bugs are out for blood.


Both bites and stings hurt, but the motivation behind them is very different. 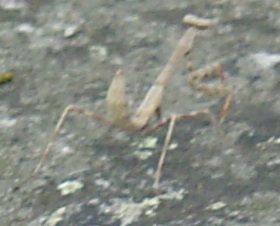 Bites and stings also happen in relationships.  Most of the hurts, I believe, are just stings.  People feel threatened, and lash out to protect themselves.  Some are very touchy and easily provoked, like yellow jackets.  They become very aggressive, and just plain mean.  Others are more easy going and rarely sting, like wasps.


Those who bite are predators.  They seek conflict and thrive on sucking the life out of others.  They come after their victims.  They are always sneaky, like the mosquito that bites your neck, or the tick that lurks under your clothes.  For some unhealthy reason, people who bite feel like they need conflict to survive.


The bites and stings in life hurt.  Maybe it helps to know the motive behind the hurts.  We can watch out for those who bite and take steps to avoid having our blood sucked.  We can recognize the stings as self-defense and handle them with grace.


See any mosquitoes or hornets in your life?  How about when you look in the mirror?