'Tis the season for...
Yes, those awkward conversations with relatives you rarely see--these conversations are just around the corner. Everyone says that you have to avoid talking about religion and politics. That's probably good advice. Interestingly, these two realms meet in places beyond the dining room table.

For millennia cultures have found that politics and religion just gravitate toward each other. Too often this combination creates tangled webs, especially when power is held as the highest value. Both religion and politics wield power in this world, and the merger of these two sources of power looks like a good way to get things done.

It reminds me of the Ring of Power in Tolkien's famous trilogy. In the story, the wizard Gandalf knows the seducing effects of this ring. He knows that he could be tempted to use the ring for good, but that the ring would work corruption in his soul, eventually leaving him incapable of sound judgment. As the old saying goes, "Power corrupts, and absolute power corrupts absolutely."

And so we find good intentioned people being seduced by the siren song of power. If you just get people in office who vote the right way, the world will be a better place. It doesn't matter if these people lack personal character. All that matters is the policies they pursue.

Politicians gain power, and then we are SHOCKED when they abuse it. Wow, that's never happened before.

We can't bear to let the other team get in power, so let's elect our own vile, corrupt leaders. Then we get to defend and explain away all the crimes and abuses.

I'm amazed at the mental and moral gymnastics I see as people try to defend the defenseless. 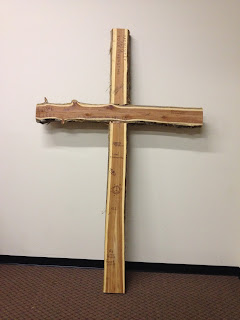 But there is a kingdom with a perfect Leader. His kingdom is not of this world, but eyes of faith can see glimpses of his powerful reign. He says to put others first, love enemies, and trust the Father. His ideas got him crucified. Then he defeated death itself.

We are soon to celebrate his birthday.