I think we made it through today without another high profile sexual harassment revelation. In recent weeks the dam has burst and the news is flooded with stories of politicians and celebrities who misbehaved.

I'm glad that these stories are coming to light. Clearly this is a bigger problem than naïve people like me had realized.

Throughout history, men have let their hormones think for them way too much. With men working alongside women more now than ever, situations arise in which men have the opportunity to use their power--whether physical, political, or economic--to force themselves sexually on women.

What we need is respect. We need to care about others more than our own desires. We need to treat others as those created in the image of God, not as objects for our own pleasure. We need God's transforming power to change our hearts.

The problem of sexual harassment is compounded when a culture keeps this dirty little secret. It could be Hollywood, a corporate boardroom, or the halls of Congress. When "everyone" knows about a problem and no one speaks out, we have a conspiracy allowing abuse.

So many people, institutions, organizations, and corporations share the blame. Why have we not said something until now? We don't want to lose our jobs. We need the funding or favor or connections of that dirty old man. We know that other people turn a blind eye, so we follow suit. We don't consider it our business, so we remain silent.

In other words, we let them get away with it.

But not anymore. Many powerful men are now sitting up straight, minding their manners, hoping that their own stories never come out. They could be next.

There are also some potential problems with the drive to get men to behave.

Even with the possible problems that come with this new sensitivity to harassment, I believe this is a good trend. Society is agreeing that sexual predators should be called to account. 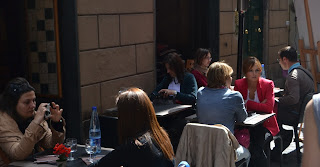