Patriotism seems to be suspect these days.

There has never been a perfect government on earth. Some governments are better than others, but none is perfect. That's because human governments are run by humans. Our selfish, arrogant, blaming, judgmental natures come through every time and mess things up. The best we humans can do is anticipate the bad actors and plan accordingly. And by the way, we are all potentially bad actors, especially when we are entrusted with power.

Our imperfect founders realized that only flawed people are available to lead any nation. They set up a system whereby no single person or group of people can run the whole government. The hope was that unwise or selfish policy would be avoided when responsibility is shared. With our Constitution, there are three branches of federal government, each with its own limited responsibility.

Unfortunately, these checks and balances have not prevented unwise government policies and actions. It took far too long for the U.S. to allow Americans of African descent to have rights equal to those of European descent. The battle continues today. Women were not allowed to vote until 1920. Agreements with Native Americans have been virtually worthless as our country has shoved that population into scattered reservations.

This country is flawed. It has a history of abusing its power and its citizens. It has rewarded those who exploit others. It has meddled in the affairs of virtually every other country of the world. It has fostered in its citizens a sense of pride and arrogance.

The United States stands for high ideals that are worth celebrating:
I do love this country. It is the only place I have ever lived. I choose to love this imperfect country, partly because it's all I know, and partly because its system offers the hope that wrongs can be made right.

I don't worship the United States, but I choose to be patriotic. Patriotism does not require perfection. This Independence Day let's celebrate this imperfect land of freedom and opportunity! 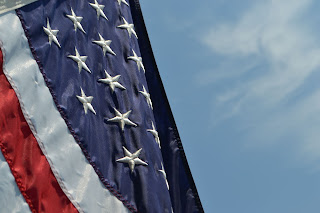