I'm finding new appreciation for old Abraham. According to Genesis, God told Abram/Abraham to leave his country and his father's people and go to a land that God would show him (Genesis 12). This Abram did, and when he arrived in Canaan, he had done what God had asked.

And he spent decades wandering around this land, even leaving it to live in Egypt for a while. God spoke to him and appeared to him during these wanderings. But it seems like there were long stretches when he heard nothing from God. All the while he had to trust God. Even during the silence.

I think following God for the long haul leads us to places like that. We have followed God, but we don't know what to do next. We wander and wait. We have to trust God that he will meet us again, direct us again. And during that time we learn to believe. We believe him in the silence. We have to remember what God has said. We have to hold on by faith.

God has not forgotten you. While you are waiting, just wander by faith. 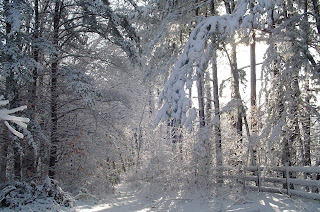