Give it a rest

I recently finished a book called, The Rest of God, by Mark Buchanan.  This is the book I have been looking for since I became a Christian.  It really explains the concept of Sabbath.

I remember friends at a Bible college who were prohibited from studying on Sunday.  They could stay up past midnight on Sunday, and study in the wee hours of Monday morning, but they had to wait for the clock to strike 12.  Never mind that the real Sabbath is Saturday.  Never mind that the real sabbath is reckoned from sundown to sundown.  At that college, Sabbath went from midnight to midnight.

On what authority did they make that rule?  Is that what Jesus has in mind?

And how does Sabbath-keeping avoid the pitfalls of the uptight Pharisees, whom Jesus condemned?  How do we keep the fourth commandment without being legalistic?  If Sabbath is really made for man, then why is it such a burden? 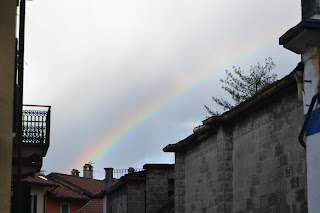 Buchanan makes the case that real Sabbath begins with a change of attitude.  We can be still outwardly, while we are churning inwardly.  What kind of rest is that?

I have been more intentional about taking time off, both mentally and physically, but I've got a long ways to go to live out Sabbath as God intends.  At least now I'm making progress.