Stick it to the Yankees

I get an uneasy feeling when I see Confederate monuments. It seems that such monuments say more about those who built them than those they honor. When the South lost the Civil War, Southerners were forced to give up important social and economic conventions. Building monuments seems to be a passive-aggressive way of holding on to unhealthy attitudes.


The surrender at Appomattox meant that outwardly the South had to change. Somehow hearts did not follow suit. Changing hearts takes more than pointing a loaded gun. So while the South had to end slavery as an institution, many Southern communities held on to all the trappings of slavery that they could: separate water fountains, restrooms, hotels, restaurants, types of employment.


As a way to stick it to those damned Yankees, Southern communities did all they could to hold on to the idea that they were right. Just because they won the war doesn’t give them the right to tell us what to do. They weren’t all that noble themselves, those Union soldiers. So decades after the end of the Civil War, Southerners were still constructing monuments. Cold soldiers on horses proudly looked down on all passersby, reminding everyone what the South was all about.


I hope that is no longer what the South is all about. 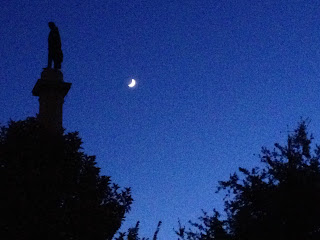