As the U.S. government shutdown extends into record territory, we see more clearly what motivates the politicians who have led us into this impasse. Both sides are digging in, declaring their resolve never to give in.

We now know that Republican leaders have decided that America wants a wall all across its southern border. The security threat is so severe that only a barrier against Mexico can solve the problem. Never mind that many Americans vehemently oppose the wall. Never mind that most terrorists enter the country through airports. This is too important to give an inch on.

We also know that Democrats have never wanted any part of any wall. Except that they did. They are on record calling for improved border security, including some sort of physical barrier with Mexico. But now, this issue is too important to give an inch on.

Meanwhile ordinary citizens are caught in the crossfire. Federal workers have no paychecks. Parks are closed. Those who rely on government assistance may not have enough to eat. I talked to several people today who live on the edge, and they are worried about the shutdown. To them it means more than political points. It means food on the table and a roof over their heads.

So our leaders stand firmly on principle. The principle is stubbornness, inflexibility, or sticking it to the opposition. If a few people have to default on loans, go hungry, or wait for life's necessities, well, that's a price that politicians are willing to pay. 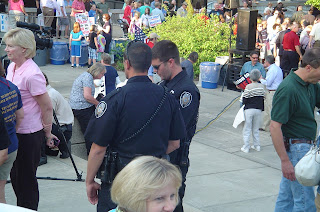